We’ve collected conversion-optimized scenarios proven to generate leads, boost sales and retain customers. Leave your email to acess them and other useful resources.

Got it! Check your email. 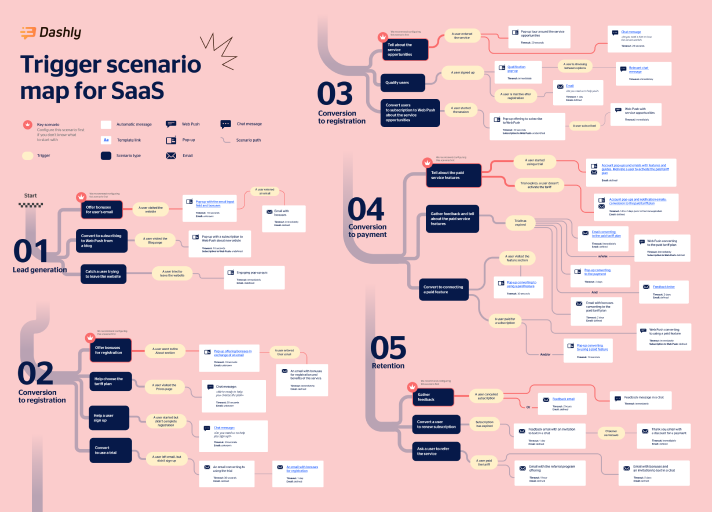 “Growth Hacking”. It’s a term that gets thrown around a lot these days.

There’s also another term that is often associated with “Growth Hacking” in marketing-speak — “Hypothesis Testing Pipeline”.

Big name, but fairly self explanatory.

In this article, we’ll be looking at both of these terms and trying to shed some light on how they tie into your business.

“Growth Hacking” is often used in the context of growing something (usually a business) at an exponential rate by manipulating its vital growth elements.

The problem is that a lot of people misunderstand this concept.

For instance, many companies try to hack their business’ growth by inflating their sales plans and advertising budgets. Pretty soon, they’ve blown a huge chunk of their budget (sometimes all of it), but the result they expected never materializes.

Andrew Chen — an authority on startups, growth, metrics, and network effects, whose writings have been featured and quoted in The New York Times, Fortune, Wired, and WSJ — believes that after a certain time, channels exhaust themselves and cease to be effective. Additionally, many of them do not scale at all.

This is why putting your advertising on steroids will not lead to explosive growth.

Andrew Chen practically popularized the term “Growth Hacking” in a blog post titled, “Growth Hacker is the new VP Marketing”, so he’s someone you might want to listen to.

That’s not to say growth hacking is a hoax.

In fact, there IS a smart way to leverage growth hacking. And in this article, we’ll be telling you how to growth-hack your company at a sensible pace, so that you get maximum growth without burning out.

Sit tight, because we’re about to share with you some top notch advice from Yuri Drogan, the Growth Hacking expert who guided the  Dashly team in its quest for growth hacking.

Growth Hacking means “cracking” the growth of a company or a startup. It happens as the result of many initiatives, primarily marketing. The word “hack” is more of a colloquial term in this case.

Growth hacking is the process of generating and testing hacks that will lead to growth.

For instance, there was a time when the “hack” of having a referral program where you “Invite a Friend and Get a Bonus”, or content marketing, brought companies a growth up to $20 million in revenue.

Growth hacking is a systematic and ongoing test of hypotheses with the purpose of company growth.

Profit only. Once a week in your inbox

Subscribe to get more guides and marketing best practices

Welcome to the family. Profit is on its way!

Think of a company that EVERYBODY knows. Can you think of a couple more?

While everyone knows these businesses, they were once small startups with zero users and no revenue. But now, they now have multimillion-dollar revenues and a massive customer base. And they’ve achieved that by hacking their growth like crazy.

Airbnb had neither users, nor a reputation for being a reliable service for finding and renting housing. They needed to quickly build a customer base and establish themselves in the market.

To do this, they provided users with an opportunity — in addition to publishing on Airbnb, they could quickly and easily post their listings on Craigslist, an electronic classifieds site that was very popular at the time. So they got access to a huge database of their target audience.

Dropbox proposed a hypothesis about referral programs: if a user invited a friend to the service, they would each get 500 MB. This is the kind of strategy that —when implemented properly— can drastically boost the number of new users.

Additionally, sharing the link is as easy as making two clicks, which makes the potential for growth even bigger.

This little strategy boosted Dropbox’s registrations by 60%. The hypothesis was confirmed, and now we all know about Dropbox.

Facebook currently has over 2 billion users. They achieved such numbers with the help of their own hack machine.

One of the hypotheses they tested, was an email newsletter with a notification that the user had been mentioned in a post or tagged in a photo. This has helped increase the number of returns to accounts.

But this strategy has turned into a double-edged sword. Now, it’s come to a point where you’re flooded with notifications just because a friend of yours posted on someone else’s wall. And that’s not what makes a social network attractive. Instead, users are increasingly seeing it as a trick they don’t want to fall for.

So now you’re probably wondering, “How can I use all of this to growth-hack my business?”

How you can use growth hacking for your business

In our article, “Are you making any of these 7 funnel-killing mistakes?” we talked about the mistake of trying to reinvent the wheel. When it comes to business, mistakes can have very serious consequences, which is why learning from the successes and failures of others is crucial.

So let’s see what we can learn from the achievements (and mistakes) of the companies we mentioned above.

As explained earlier, Growth Hacking enables businesses to achieve exponential growth through the constant testing of hypotheses. “Exponential growth” refers to a kind of growth that is two, three, five, ten times what a business would normally expect to see.

How fast your business grows, depends directly on the number of hypotheses you test and experiments you run.

The more you test, the more likely you are to achieve exponential growth.

What does it mean to “test a hypothesis”?

Einstein was a pretty smart guy. And yet, when he was building his Theory of Relativity, he went about it in a very basic, methodical and structured way.

So, a hypothesis is an assumption that requires proof.

In the case of growth hacking, this assumption is within the context of rapid growth. And the experiment is conducted in order to prove or refute the hypothesis.

Let’s say we start with the hypothesis that we can increase sales by X by installing online chat on our site to communicate with our customers.

Next, we conduct the experiment by actually installing online chat and monitoring calls and sales. We notice that after we installed chat, our sales actually increased, so our hypothesis is confirmed.

A hypothesis is a risky assumption that a metric will behave in a certain way if we change something. This is usually a quantitative experiment.

The whole point of the growth hacking process, is to come up with a lot of hypotheses, and use experiments to test them rapidly.

The coolest hypotheses are always about the value of the product for users.

Why you need to test a lot of hypotheses

Here’s a scenario for you to consider.

You want to grow fast, so you start testing hypotheses. You can probably test one hypothesis per week. There are 52 weeks in a year. If you take away holidays, and maybe a couple of weeks for sick leave, meetings, conferences and so on, you’re left with around 42 working weeks a year. So that’s 42 hypotheses tested in one year, assuming we stick to the schedule of testing one per week.

That doesn’t sound too bad. But if you actually look at the numbers, you’ll find that only about one in ten hypotheses turn out to be true. So out of your 42 hypotheses in a year, you’re left with only 4 that you can work with.

Additionally, imagine that each of these hypotheses bring you 3% growth. That’s works out to roughly 12% per year.

But try testing 300 hypotheses. That works out to around 30 successful hypotheses, contributing an expected average growth of 3% each, for a compound annual growth of over 142%.

The number of experiments per week is directly proportional to the growth rate of the company.

Of course, it’s not as simple as it sounds. To test five, ten or one hundred hypotheses per week, you need a well-established testing process — a hypothesis generation engine, continuous experimentation, and analytics.

How to start your own hypothesis pipeline

We’ve already agreed that the more testing you do, the higher your chances of getting explosive growth. To do that effectively, you’ll need a growth hacking team that will devote all of its time to generating, prioritizing, testing and analyzing hypotheses.

Andrew Chen believes that growth hackers are typically marketer/programmer hybrid. When you ask them the question, “How do I bring users to my product?” they will reply, “By A/B testing landing pages, virality hacks, and mail shots.”

Growth hackers rely on data and quantitative measurements. They draw conclusions exclusively on that basis. And these are the kind of growth-oriented people that you will need in your growth team.

The selection of the team itself should begin with the grower of the master – the person who will be responsible for team processes, plan sprints, and also manage the testing process.

The growth team needs not a leader, but a competently-built process for testing hypotheses.

It is difficult to clearly define positions in the growth team. Full-stack specialists are highly-valued because they can navigate the many tasks involved, while hiring individual specialists for every aspect of the process is too expensive. You need people who can fulfill these roles:

Growth hacking is the process of building something very quickly “from mud and stone” (as the old saying goes). Involving a dedicated designer at this point can only slow down the work, so there should be someone in the team who knows how to quickly cut landings, make buttons, and so on.

The primary goal of the growth team is —you guessed it— growth, and its primary task is to quickly test quantitative hypotheses.

Now that you have a growth team, all that’s left is to build the process itself of generating ideas for hypotheses, testing them, and analyzing them further.

And we’ll tell you how to do this in part two of this article.

Author: Jennifer Jackson
I write about business growth hacks
Start with Dashly
First 7 days are free
Get started
Follow us in social network and messengers
There we share cases, news and lifehacks that don't get into blog